This blog entry wouldn’t be here except for social media.

Without Twitter I would never have known of Magic Media Force or its owner, Rebekka Deforce…

I was playing around with Twitter one day, looking for people and companies to follow and came upon Rebekka’s Twitter. She made a statement or observation about video production, my specialty as well, that I either found funny, interesting or both so I commented. And she answered back!

Over a period of months, Rebekka and I moved over to Facebook where we sometimes had some real time chats, and we got to know each other a bit. She told me all about Magic Media Force and I told her of my own video experiences and other interests.

One day, for fun I sent her my demo of character voices and to my surprise, she asked me to do a voice over! I had done a few voice overs in the city where I live (Boston, MA, USA) but up to that point, not yet online. It was amazing to me how an audio file could be recorded and edited on a computer in the U.S., sent intact to Europe and the payment could be made on Paypal.

This was networking in action, yet it wasn’t a calculated campaign on my part to drum up business. It just happened naturally through friendly, online interactions.

I had never bothered with Twitter, in fact didn’t even understand what it did or even how to use it properly. 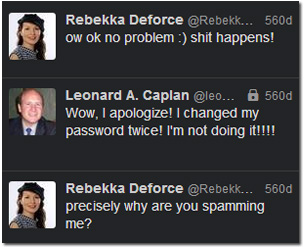 I used to call it “Facebook with just a status”.

But it turned out to be so much more than that. After my encounter with Rebekka,  I “got” it! Twitter could be used to follow others with my interests and I could learn more about any topic that I wouldn’t necessarily get with a simple Google search. I discovered websites, experts in any given field and even online schools I didn’t know existed.

But beyond networking, I have learned that you can also make friends. As in the real world, you’ve got to be careful, but also like the real world, over time, trust can and does develop.

Today I consider Rebekka Deforce a friend as well as a colleague. Now she has asked me to be her “Guest Blogger” and I’m proud to do so! :)
From time to time, you’ll be seeing my entries here on video, writing, teaching, music, comedy, voice overs, hosting talk shows and more.

Social media is amazing. So is today’s technology. But all of it is useless without the human element.

When it comes down to it, all the software and hardware toys we use today are merely tools to help us create a wider circle of friends and colleagues to do business and have fun with.

I really like it Leonard I wish you good luck and much success.

Thanks Fahad! :) Glad you liked it!